Our last night in Prague… (December 3rd)
We just finished packing and cleaning the apartment…our taxi is coming at 6:15am tomorrow…Yikes!!! It’s going to be a very long day! We have had the most wonderful time here and are so thankful for the chance we had to live here and experience Europe, it was amazing! All of us are VERY sad to leave it behind. On Sunday while we were singing the hymns we got teary-eyed that it would be our last Sunday!! It is the sweetest branch with the nicest Branch President. I’ll have to post the picture soon of us with most of the missionaries…there are probably twenty missionaries in the Branch! One of them even made Sophia a Czech Primary hymn book! She was very sad to say goodbye and has been taking it harder than I thought a six year old would!!! She started bawling yesterday asking me to stop packing, can’t we just stay here! She’s also been pointing out several things that everyone loves about this place, it’s very cute! And she keeps talking about us moving back here! But she is excited to start Kindergarten (hopefully we can find a job/house soon so that she will at least have that to look forward to!!!). Even Oliver is more aware than I expected him to be. He LOVES this house…calls it his very own house! The thing he will miss the most is riding on the trains! When we were in Italy/Switzerland last week we rented a car to drive around the country more and he kept asking when our next stop was! It was very cute! Elliot will also miss the trains and trams! I think all of us will miss the trains and trams, it’s going to be weird to drive a car again!

It was fun and sad at the same time today going to the markets and little shops for the last time. They have the cutest Christmas festivals set up all around Prague…made me VERY excited for Christmas!!!

I hope all of you are having a wonderful day/week…I’ll try to post some pictures soon, we’ve been a little busy! I will for sure post pictures of Switzerland…we stayed in a very cute cottage and got snowed in one day!! It was so much fun! 🙂 I think our next move might be somewhere between southern Switzerland and northern Italy, it is BEAUTIFUL there, not just the buildings and houses, but the land is gorgeous! 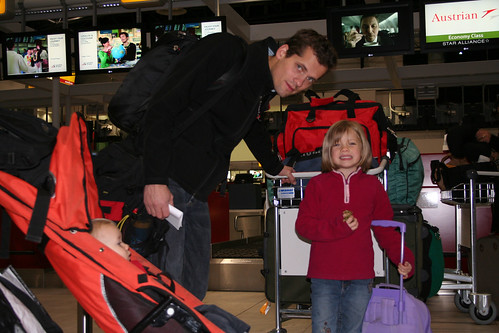 (December 4th – Prague Airport)
Well, we finally made it to Andrew’s parents around 10:30pm last night (so 4:30am Prague time!!!). It was the longest 24hrs of our life!!! We woke up around 5am and met the taxi on the curb at 6:15. Our flight was scheduled for 8:45 so we had plenty of time. Of course since we were ready and prepared, something had to go wrong, right! The first thing on the list of many things to go wrong that day was Elliot’s ticket. We forgot to hold onto his PAPER ticket they issued us back in June…so we then had to wait for the office to open at 7:30 even though we saw the lady in there around 7, she couldn’t be bothered until 7:30! But we still had plenty of time, so no stress. Finally we talked with her and she made us purchase another ticket for him!!! Then we re-checked in and for some reason they were still having issues with his ticket and with my seat for the next flight. They finally told us to ago ahead and board and by the time we got to Vienna, Austria they would hopefully have it solved!!!

So we went to the gate thinking we’d be boarding within the next ten minutes. When it was about ten minutes from when we should be flying away from the airport Andrew went up to the desk again to find out what the problem was. Finally at 8:45 they told us that our plane was delayed (really!) then they finally said it would be delayed until 9:50! We were supposed to be boarding our plane in Vienna at 9:50!!! Thankfully we had four missionaries that were also going home to keep us occupied while we waited! I really do not like the buses we had to get on to take us to our tiny plane that we then had to hike up the stairs and down a very skinny isle! After that one hour flight we landed in Vienna and obviously had missed our plane by an hour and a half! So we then got to stand in line for three hours while the entire plane tried to re-route their tickets!!!

After that we got to race to the other end of the airport in order to make our flight to Frankfurt. By this plane ride I was very bothered with all the rude people around us that kept running my children over and not moving out of the way when they knew we had to got on the only bus to take us to yet another cramped plane! I ended up having to basically throw the stroller and three bags I was carrying (Andrew was carrying both tired boys) onto the bus as I yelled “please move out of the way!” After that I think people finally realized there was a family with small children traveling with them and a few finally offered to help us!

When we got into Frankfurt we then had to walk the entire airport to the farthest corner to get on a flight to DC…this one we actually got to sit down for about 30mins before boarding started! Then on this flight our tickets were messed up again so we had to have them re-print some…but they messed up on our seats so we weren’t all sitting next to each other! Luckily one good thing happened and it wasn’t a full flight so people switched with us. The funniest was a lady was seated next to Oliver on our row and was completely freaking out because she had to sit next to children!!! I was trying to be nice to her and offer her to trade to the seat we had in the next row back, but she didn’t want to be within ten feet of us!!! I’m not sure where she sat, but she managed to find a seat far away from us…which was great for us because we then had five seats!!! Our kids were SUPER travelers, only had a few crazy moments. We survived the flight, made it onto yet another shuttle bus where again I had to bully my family through the crowd to find a spot for us! Then we made it through security check-in, and then of course our luggage was lost!!! So it took about another hour to file the claim!

We are exhausted to say the least and realized that rudeness runs in every country!!!

Then to add to our exhaustion, Oliver woke up at 3am to use the bathroom and have some toast and banana, which then woke Elliot up. I finally got them both back to sleep and Sophia woke up at 5am to a wet bed…which also woke Elliot up. To add more excitement to the night I went downstairs to look for more pjs for Sophia and turned on the laundry room light, as I was searching through our clothes a mouse ran out from under the closet right at my feet!!! 🙂 Of course after I told Sophia this story she couldn’t go back to bed! Finally around 6:30 when I decided it was more torture to stay in bed…we got up!

Okay…time for an early lunch (or very late on our schedule) and then naps!
It’s weird to be back in the states, but we’re excited to have a yummy Mexican dinner tonight!!! Oh and the syrup on our yummy pancakes this morning was also a fun treat! 🙂