After almost 10 years of begging…yes TEN years…Sophia finally got her wish! A PUPPY!! 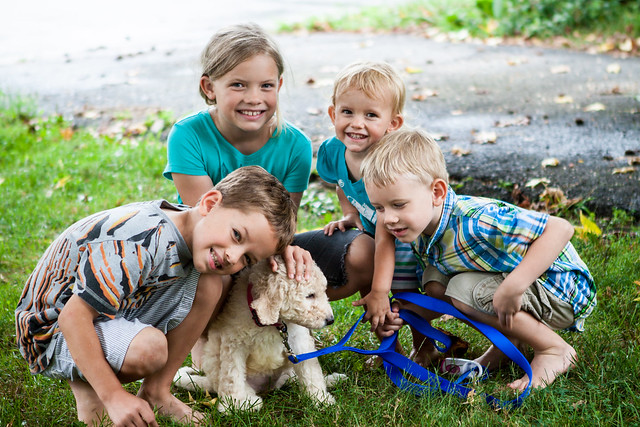 Sophia did the legwork finding our puppy. She hunted in books and online for the right kind of dog for our family and then found the breeder we ended up getting her from in one of her searches. The timing and price worked out GREAT. The Saturday after we got back from our trip out West – we drove down and picked up our little 8 week old puppy labradoodle (lab/poodle mix). The breed works out pretty great since Sophia’s #1 choice was a lab…and Robyn and my #1 choice was ANY dog that doesn’t shed (Thanks for teaching us that lesson Chris & Jen! After puppy sitting a Husky…we knew that was a major part of the decision!)

The next hurdle was a name. Each child pulling for a different one – Elliot=STAR; Oliver=GINGER; Sophia=KIWI; So, finally Mom & Dad had to take that decision away…and after the kids were playing with her – they all started calling her BEAR – so I thought of OSA (Spanish for Female bear) – seemed to fit.

And now on to POTTY TRAINING!! We’re hoping that happens MUCH faster than it currently is. She’s doing alright…but, it’s REALLY driving us crazy! Other than that and a little overzealous chewing…she’s a super great little puppy. WISH US LUCK!